Who Nicked the Sand

The story I will now relate took place in S. Devon in the Winter of 1995. I had the good fortune then of living some 500 yds from a beach accessed by some seventy odd steps cut in a tunnel through the cliff face. It was a public access beach but due to it being somewhat hidden it was less frequented than those with direct access, of which there are many in the area. As I had two Golden Retrievers at the time I used to go to this beach every morning, usually very early to give them their morning run. At this stage I need to tell you that this was a typical Devon red sandstone beach; the aforementioned sandstone as most of you may know is very soft and friable and weathers very readily and the beach consists of an area around 1000yds long by some 100yds deep to the low water mark. It was almost completely red sand with the odd very large rock dotted here and there. This particular morning when I arrived however I was greeted by nothing less than a ‘moonscape’ consisting of jumbles of rocks ranging from some 20 tons down to pebbles. When I tell you I had visited this beach virtually every day for fifteen years without ever having so much as a hint of this underlying layer you can imagine how surprised I was (I got some pretty strange looks from the dogs also!)

Anyway I hastily returned home to get my then C-Scope Clubman 3 and was back within fifteen minutes, minus the dogs who consider every form of digging to be their job not mine! I started at the low water mark so that I would keep just ahead of the advancing tide and within ten minutes it became apparent that I would not need the detector. The removal of the sand had acted as a ‘sump filter’ and any heavy objects had just graded down in the cracks between rocks until they reached bedrock. In this way I found 147 coins in some three hours!!

During the whole time I was there I never saw another living soul; mainly because it was not too warm and chucking down with rain(unusual for England). This beach was also used by US forces in 1943/4 to practice for the D-Day landings and mixed in with the coinage there were many .30 cal bullet heads and the ever present lead fishing weights. By the next day the beach was half covered in sand once more and three days later you would never have known anything had happened. A storm from an unusual quarter had removed Lord knows how many thousands of cu.yds of sand from one side of the estuary to the other, dropping the beach level by around five feet, and then normal weather patterns and tides had promptly moved it back again!

Whilst there was nothing of great value, and I suppose it would be thought of by most as junk my haul, for what its worth, was as follows:

The remainder was made up of defaced silver (half crowns, florins, shillings, sixpences,etc) and old pennies, half-pennies and farthings from the 1880’s until the arrival of decimal coinage.

As always with beach finds the coins have literally ‘been through the mill’ so are worth nothing to a collector, but that day gave me such a charge that the monetary value of the finds was of little consequence. Over the years I have taken hundreds of pounds in modern coinage off of the same beach, usually on the evening of the day it was lost. Like beach hunters the world over that has contributed to my MD upkeep and travel costs etc. The keen eyed amongst you will notice an American quarter by the crowns which was put there for size comparison when I published on a US site. 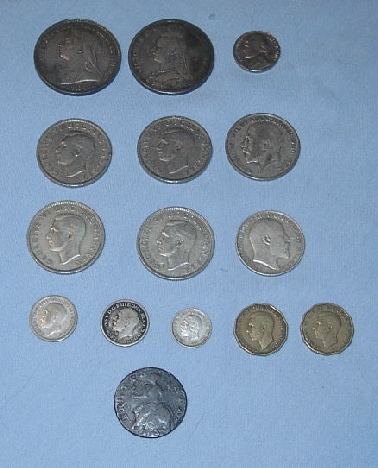 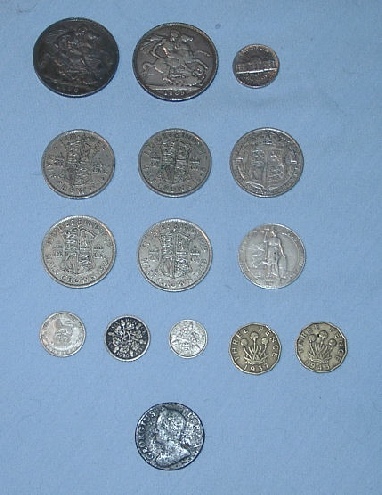